Ruth: A Witness Against Terrorism 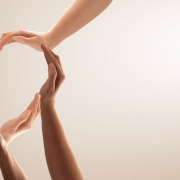 The Parting of the Ways
Prayer Declaration 2020 – Thank you

The Parting of the Ways