The Gospel According to Hanukkah

I remember the first time I read the New Testament like it was yesterday. I was attracted to the book—especially to the words of Jesus, but had sweaty palms as I turned each page.

You see, I was raised in a traditional Jewish home in New York City and though my family was not religious I was raised modern Orthodox. Everything I knew about Judaism was Orthodox and nobody needed to tell me that I should not read the New Testament. I cannot even begin to describe the guilt I felt in reading and enjoying the New Testament.

May I step back for a moment? I probably never would have even read from the New Testament—I was 19 years old at the time I encountered my first New Testament. And again, I would not have read it unless I had received it in a miraculous way. I was becoming interested in the message of Jesus, because the lives of my two best Jewish friends were transformed right before my eyes once they believed in Jesus.

They witnessed to me, but I resisted and tried to talk them out of it. I was trying to get them out of what I felt was probably some kind of weird cult. Instead they kept encouraging me to read “my Bible”—what is commonly called the Old Testament. As you probably know, Jewish people do not call the Bible the Old Testament—even though we do not read the New—because, in the Jewish mind, there is no New Testament! That’s the book that Christians read—not the book that Jews follow.

I loved what I was reading in the Old Testament and found myself wanting a relationship with God that was personal, intimate and even supernatural, just like Abraham, Moses and King David experienced. I had never noticed that what made these forefathers of mine so great was their relationship with God.

Weeks and months passed and I became more and more interested in knowing more about the God of Abraham, Isaac and Jacob. I just did not want to believe in Jesus, because I would have to tell my family and I knew that I would be rejected.

One day I just could not take it anymore, and I prayed my first spontaneous prayer (Jewish people usually pray in Hebrew and follow written prayers). I asked God, “If you are real, please show me and show me how to get you.”

That night, believe it or not, I found a copy of Good News for Modern Man—a modern English version of the New Testament—in a phone booth in the middle of a campground in the redwood forest where I was working at the time! I began reading the New Testament and fell in love with Jesus. He was the smartest person I had ever met—He knew how to answer people and was nobody’s fool. What really struck me was how Jewish He was!

The more I read in the New Testament the more I understood that He was Jewish, celebrated the Jewish holidays and held the answers I was seeking. I finally came to the point where His words brought peace to
my heart.

Finally, I accepted Jesus as Messiah and Lord in November 1970. The first holiday I celebrated was Thanksgiving, and that was really wonderful.

Soon after, I came upon a dilemma because both Hanukkah and Christmas were approaching. Some of my new Christian friends thought that I would really enjoy celebrating Christmas and of course I was raised in Jewish New York and we celebrated Hanukkah, almost as a protest holiday to the majority who celebrated Christmas. I loved Jesus, but I was not yet comfortable with the holidays usually associated with Him, as I was not raised that way.

Someone pointed out to me that Jesus celebrated Hanukkah. I think at that point I was still trying to figure out when and how Jesus celebrated Christmas. I was a little slow and it took me awhile to get the point! But I was very intrigued by His celebrating Hanukkah.

In fact, the only time Hanukkah is mentioned in the Bible is in the New Testament. It is not mentioned in any of the Hebrew Scriptures. After reading John 10 and studying the passage, I finally understood that the Gospel and Hanukkah were intertwined…it was really the Gospel according to Hanukkah!

One of the greatest statements Jesus ever made about Himself was during the feast of Hanukkah. As you will read in this newsletter, Hanukkah is a post-Old Testament holiday that developed during the centuries immediately prior to Jesus’ birth.

I believe that Hanukkah is all about the Gospel. Please take a moment and read this text!

At that time the Feast of the Dedication took place at Jerusalem; it was winter, and Jesus was walking in the temple in the portico of Solomon. The Jews then gathered around Him, and were saying to Him, “How long will You keep us in suspense? If You are the Christ, tell us plainly.” Jesus answered them, “I told you, and you do not believe; the works that I do in My Father’s name, these testify of Me. But you do not believe because you are not of My sheep. My sheep hear My voice, and I know them, and they follow Me; and I give eternal life to them, and they will never perish; and no one will snatch them out of My hand. My Father, who has given them to Me, is greater than all; and no one is able to snatch them out of the Father’s hand (Jn. 10:22-29).

The above statement is simply incredible! To think that the Messiah said this during the great festival of Hanukkah is astounding to me, having grown up in a Jewish home. But Yeshua did not stop there as He continued to infuse new meaning to the traditional festival of lights and redemption by showing the linkage between Himself and the Father.

Believe me, the Jewish people of the day knew exactly what He was saying and His statement was not well received!

Look at what happens next,

The idea that a man would claim to be God is understandably offensive to the Jewish people who are taught that God cannot take on human form. I was taught this as well growing up in a Jewish home. And ordinarily this would be true. But, this perfect man would be the Messiah who died for our sins.

Dear friend, this is the Gospel according to Hanukkah. God sent His only Son as His greatest gift to you and me—better than any Christmas or Hanukkah present by far! And through this divine Messiah we have true spiritual freedom that will endure forever.

Merry Christmas and Happy Hanukkah—May the Lord fill your home with His light and joy.

Your brother in the Messiah, 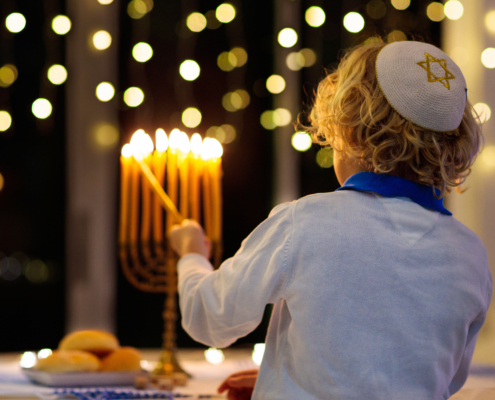 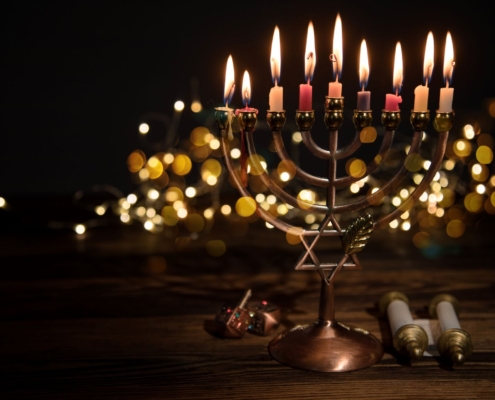 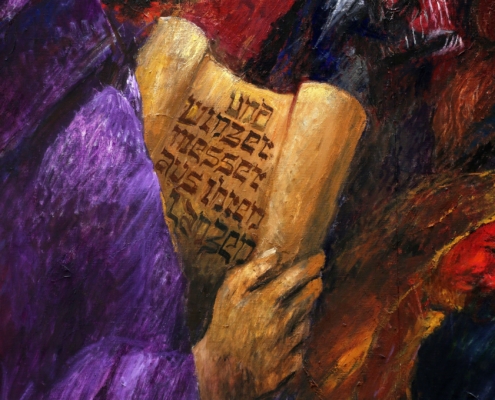 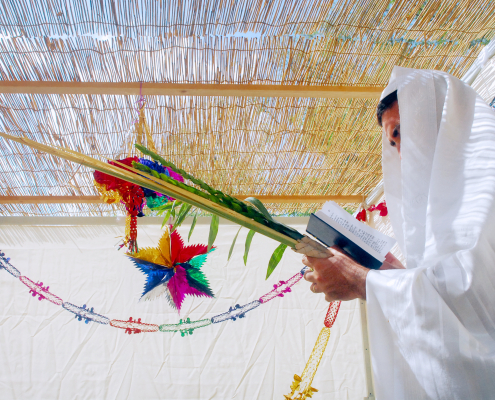 The Feast of Tabernacles, which is called Sukkot in Hebrew, is a festival of joy. It celebrates the goodness of God’s protection; both in the wilderness, and through the trials and tribulations of life. As believers, we join in the celebration…
https://www.chosenpeople.org.uk/wp-content/uploads/2021/09/happy-sukkot-new-scaled.jpeg 1718 2560 Raje Ballagan-Evans https://www.chosenpeople.org.uk/wp-content/uploads/2017/12/CPM-UK-Logo-300x50.png Raje Ballagan-Evans2021-09-23 19:01:222021-09-24 17:37:55Sukkot: Rejoice in God’s Provision! 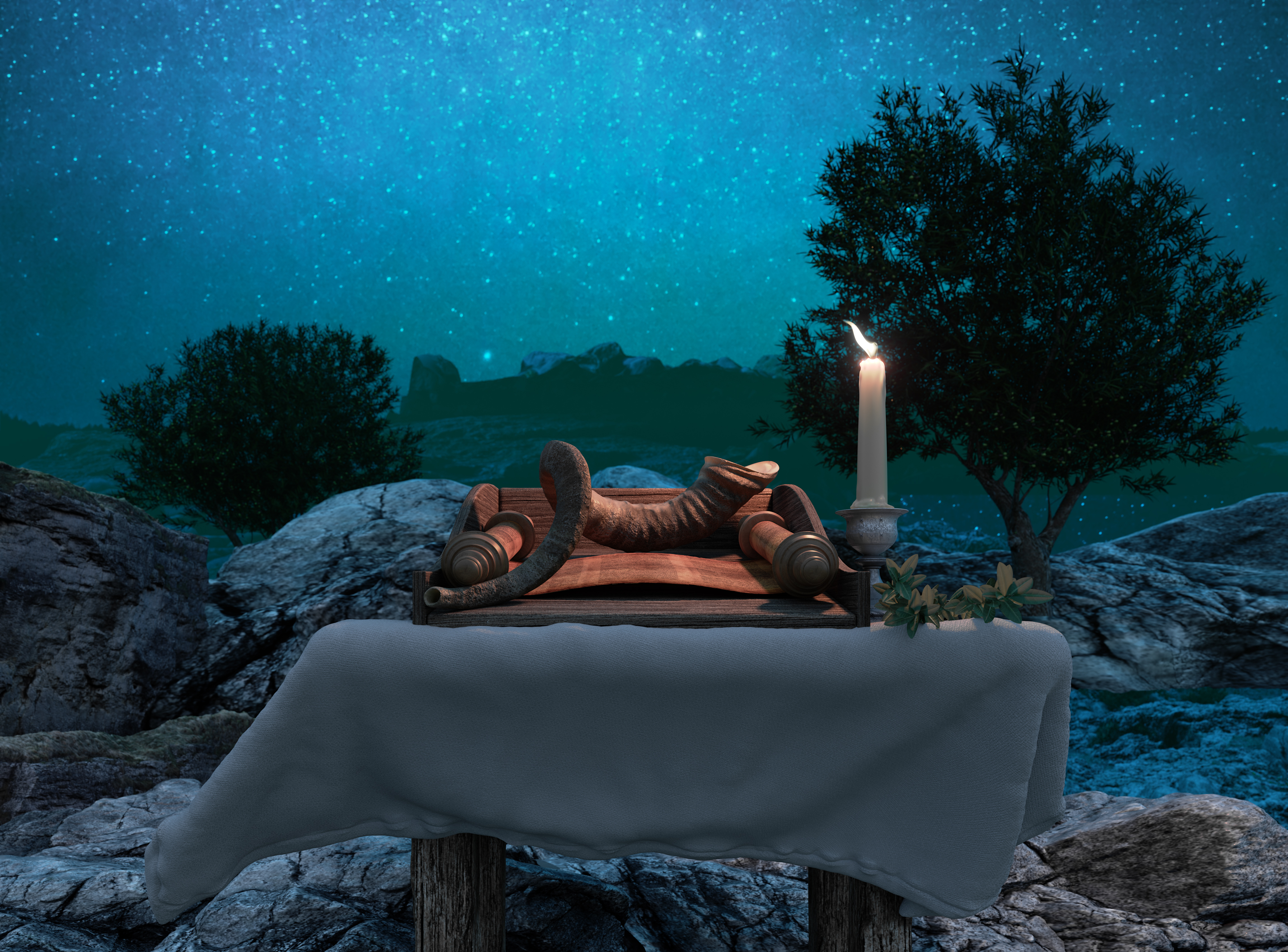 Hanukkah: Light to the Nations