Our Chosen People Ministries staff regularly speak in churches across the United Kingdom. Topics include: How to Share the Gospel with Your Jewish Friends and Neighbours, Understanding the Old Testament Jewish Feasts, Understanding the Jewish Roots of Our Christian Faith and our popular Messiah in the Passover demonstrations.

Would you like to have a Chosen People Ministries representative speak to your church or group? Please call 0208 455 7911 or email info@chosenpeople.org.uk. Our speakers are all accomplished presenters of God’s word, and are sure to be an encouragement to your congregation.

For a list of topics Simon is able to speak on, please click on the bottom of the page. 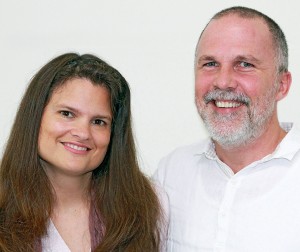 grew up in a home environment that rejected all forms of organised religion, Simon always considered himself half Jewish and was very proud of his father’s family history. Being Jewish was never really about faith in God but it was a significant part of his identity.

After graduating from University College London, Simon worked in publishing and finally the television industry where he ran his own hire business. Despite some business success and a stable marriage, in his late thirties he had a nagging sense that there must be more to life than just the material.

In 2004, with the birth of his first son Felix, Simon seriously began to question the meaning of life. While not actively searching for God, God was certainly searching for him!

After a series of seemingly unconnected encounters with Christians, Simon finally called out to God for answers and had an encounter with the living God that transformed his life.

Soon after his profession of faith in Jesus as Messiah, Simon was baptised in his local church where he is still a committed member. He became an immediate witness to people on the street which naturally led him to a large Jewish community in Golders Green where he had worked as a teenager.

Now on staff with Chosen People Ministries, Simon has dedicated himself to engaging with Jewish people wherever he finds himself. His desire is to grow the existing work in Golders Green and to continue weekly outreach in Stamford Hill, the largest Ultra Orthodox community in North London. Central to this process are the close partnerships he has developed with Pastors and churches in these very Jewish neighbourhoods.

Simon is married to Maxime and they have two sons Felix and Jacob.

For Pastors and those who would like Simon to speak, here is our Suggested Topics Listing:

MESSIAH IN THE PASSOVER

When God instituted the Passover for the Jewish people, He gave them a picture of a far greater redemption that was to come.  As the people of Israel sacrificed lambs so that their own lives might be spared, so God has sacrificed His own Son so that all mankind might be redeemed.

The Messiah in the Passover demonstration is biblically based but introduces & explains ancient Jewish customs that reveal both the Trinity and the Gospel! Incredibly these very rituals are performed in most Jewish households to this day! This can be taught at any time of the year, but ideally in the months preceding Easter or Passover.

SEEING JESUS IN THE LEVITICAL CALENDAR

The Day of Atonement – One man, Once a year, Only with blood. When you look at it Yom Kippur sounds a lot like the Gospel! We explore God’s plan for an eternal source of Forgiveness (Leviticus 16; 23:26-32 & Hebrews 10)

Like any Cross-Cultural evangelism working with Jewish people presents some unique challenges. This seminar or sermon covers: Why the Jews?; The role of Messianic prophecy in Jewish evangelism; The history of the Church and Jewish people; Common misconceptions about Jewish people and much more. Each event is tailored to the needs of your church or group and works best when there is a particular mission project in mind.